One of the many misconceptions amongst the LGBTQ+ community is that everyone fits into either male or female, and the sex you are born with is what determines a person’s gender. The truth is, these are called gender identity and sexual orientation, and they are different from one another. Sexual orientation is one’s romantic attraction, such as, who they are attracted to. Gender identity is one’s sense of being male, female, both, or neither. Everyone has a sexual orientation and a gender identity, but they are separate. Now that you know the difference between these, let’s discuss transgender. Transgender is when someone’s gender identity is different from what sex they were assigned at birth. Many in the transgender community will describe their experience as not being born who they were meant to be, born in the wrong body, or not born as their true self. In more simple terms, the sex they were born with and their gender identity just don’t match up.

Another common misconception is that being transgender ‘can’t start young’, or that a person so young ‘doesn’t know what they want yet’. The truth is, a child can start to express their gender identity as young as between ages two and four. A transgender child may start to dress as the opposite sex, play with toys that are commonly played with by the opposite sex, or even do subtle things that represent the child being transgender. Subtleties could include phrases the child might say, such as “I am supposed to be a boy” or “I have a girl body but I should have a boy body” and any similar phrase related to the child expressing their gender identity. Common misconceptions among parents when young children begin to display this behavior is ‘Oh it is just a phase’ or ‘She is just trying to be like her sibling’ when in reality, they are already at the beginning of their transition and are displaying gender dysphoria. In the next article, in August, we will talk more about gender dysphoria, types of transitions a transgender person goes through, and how the family can help support them during their transition. 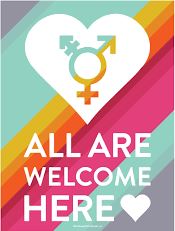 Rachel Goodman was born and raised in Phoenix, Arizona. She is a Licensed Associate Marriage and Family Therapist (LAMFT) with a Masters of Advanced study in Marriage and Family Therapy, from Arizona State University.  Her passions are to support couples in improving connection and building a strong foundation, as well as help individuals and families know they have a safe place to feel heard. Another one of her passions is helping the transgender youth community.